A bikeway and pedestrian lane (multi-use path) on the Cape Fear River Skyway Bridge is a vision that a group of New Hanover and Brunswick County Landscape Architects have for the region.

The Coastal Section of the North Carolina Chapter of the American Society of Landscape Architects (NCASLA) began meeting in early August of 2009 to discuss organizing a "grassroots effort" to have a bikeway or multi-use path incorporated into the design of the Skyway Bridge. The group has made initial contact with other local organizations that would have an interest in supporting this effort.

Adding a bikeway and pedestrian lane to the bridge, which is proposed to begin near Independence Boulevard at Carolina Beach Road and end at US Highway 17 in Brunswick County, would allow extension of the Cross City Trail near the Cameron Art Museum to the Skyway Bridge. This would also accommodate bike lane design and facilities on the Brunswick County side of the bridge. It would give Wilmington, New Hanover County, Brunswick County, and the Town of Leland the opportunity to connect the Cross City Trail to the East Coast Greenway located in Brunswick County.
A bikeway and pedestrian lane as part of the Skyway Bridge design would create an alternative to the automobile, and enhance recreational opportunities in the area. The bikeway would be consistent with the 2030 Wilmington Metropolitan Planning Organization Long Range Transportation Plan adopted on March 15, 2005, the draft Cape Fear Commutes 2035 Plan, and recently adopted NCDOT Complete Street Policy. The current 2030 plan calls for creation of a continuous system of regional bicycle facilities within the Wilmington urban area. It also calls for creation of a continuous network of safe, convenient and accessible pedestrian facilities that connects local residents and visitors to regional activity centers and major transportation facilities.
Having a safe bikeway and pedestrian lane on the Skyway Bridge will provide current and future generations with a healthy and green alternative to the automobile.
Posted by Howard Capps at 10:14 AM 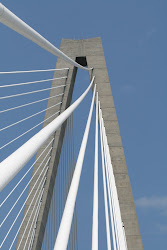